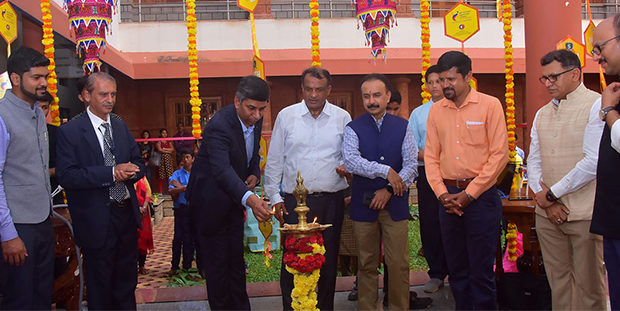 The Sixth Edition of SSTH 2019 was held with a mission to promote innovation and entrepreneurship in the South Kanara region. SSTH is an initiative of the young creative minds in line with ‘Start-up India Mission’.

The event was inaugurated by Mr. Prashanth Prakash, Co-Founder – Erasmic and Founding Partner of Accel India. In his inaugural speech, he expressed how delighted he was to be part of this gigantic scientific event where young and budding minds are given an opportunity to innovate on ideas and exhibit their talent. It is a path-breaking programme for future innovators at a school level, he stated. He called them next-gen or future innovators. India, a country which has benefitted a lot from Information Technology, can now proudly boast of such talented young minds, who will be the future of India. Mr. Prakash was optimistic that these students will move on to be future scientist and innovators.

Key Takeaways of the Panel Discussion #1:
• VR and AI will take over office in next 20 years
• Don’t waste time on Invention, instead invest time on Innovation
• Transformation from a Sharing Economy to a Experience Economy – Eg., Progression of Economic Value for Coffee
• Look at problem statements around you which can be a business opportunity
• Opportunities in Start-Up Eco-System – Skilling Organization, Quality Training Centre, Quality Mobilization
• Watch Youtube Videos on Start-Up by Mr. Aakarsh Naidu
• Involve in Creating and Editing Videos, Podcasts, Write Blogs etc.,
• Learn New Skills everyday
• Develop the Art of Story Telling
• Mangaluru is evolving as a Start-Up Ecosystem
• ABCDE: AnyBody Can Do Entrepreneurship

Key Takeaways of the Panel Discussion #2:
• What Investors look at while investing on the Entrepreneurs proposal
• Earlier, Indians worked on “How to Build”. Now, Indians are engaged in “What to Build”
• New Business Evaluation Model: Cost of Failure (COF) Vs. Wins in Failure (WIF)
• Entrepreneurial Thinking Vs. Entrepreneurship
• 3 Phases of Entrepreneurship: I will do it, I will get it done and It will happen
• Start-Up fails when core team doesn’t stay together

Key Takeaways of the Panel Discussion #3:
• Empower Teachers – More scope to learn
• Change concepts in curriculum (Practical and Relevant)
• Introduction of Skill Enhancement concepts in the Education System
• Drive ‘Buying & Selling’ activity in school by giving funds for investment. Students to buy products and sell them with profits

During the concluding ceremony, Mr. Manjunath Bhandary expressed how impressed he was with the social impact projects exhibited by the students. He said the solutions to the social concerns are in the hands of these children and selected projects will be hand-held at Sahyadri level and beyond. He said SSTH Projects were the seed to a Big Tree yielding fruits for all.

Mr. Prashanth Prakash was then felicitated by the dignitaries on dais and was congratulated for being appointed as the Chairman of Karnataka’s Start-Up Vision Group.

Participants then came forward to share their opinion on the daylong event and expressed how fortunate they felt to be a part of this event. Mr. Prashanth Prakash the addressed the gathering and appreciated the Chairman for his vision which drives the Start-Up culture at Sahyadri. He said Karnataka now stands as No.1 state in innovation. SSTH should reach every corner of the state in the years to come and help Karnataka to be a Model innovation state not only in the country but Asia and rest of the world.

Mr. Bharath Shetty while addressing the gathering appreciated the passion of Mr. Manjunath Bhandary in the field of education. He acclaimed that Sahyadri is the Best Engineering College he has ever visited.