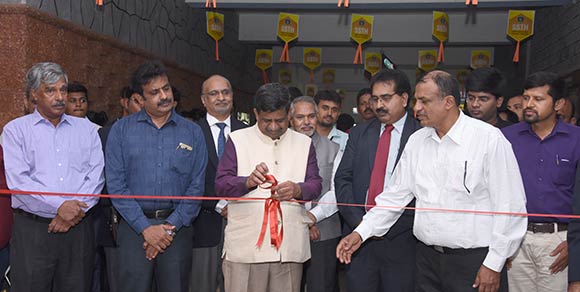 The Grand Finale of SSTH 2018 was inaugurated very differently by Dr. Karisidappa, Vice Chancellor, Visvesvaraya Technological University (VTU) initially by opening the ribbon, then Lighting the Lamp with other dignitaries and also by coding in one of the SSTH Projects named – “Mini CNC” (Computer Numerical Control) developed by the 1st PUC students of Govinda Dasa College, Surathkal which printed a copy saying – “SSTH 2K18 OPEN”.

Mr. Johnson Tellis, Project Co-ordinator gave a brief about SSTH, an annual event. He said it is a community initiative of Sahyadri and aims at imparting scientific knowledge in budding young enthusiasts. He mentioned that more than 100 colleges were reached out to, covering 15,000 students finally resulting in funding 300 projects of 1,500 students on the Grand Finale day. He said – during the course of SSTH event, the team has nurtured more than 100 scientific ideas.

Chief Guest – Dr. Karisiddappa, during his inaugural address, expressed his delight to be at Sahyadri where students of rural areas who are deprived of opportunities are given a forum with mentors from institute and industries. He said it is for the very first time in his 35 years of teaching career that he has participated in an event like this. He added that all scientific ideas come from the nature. Nature speaks to us and we should understand the nature’s language. If we understand this, we become globally renowned professionals. He urged the students to convert the projects to something which is beneficial to the society. He concluded his speech by re-iterating that the country will no longer be recognised for the wealth it has but only for the knowledge it possesses. Going forward, Knowledge Economy will be the talk of the town. The nation needs scientifically thinking students and Sahyadri is doing a great job in igniting the enthusiasm in the budding talents.

Later, a Panel Discussion was organized to throw light on the topic – “How students can leverage the Digital Resources available to them”. Mr. Siddharth Rajhans, Mr. Pranav Hebbar, Mr. Ved Prakash were the Panellists and Mr. Aakarsh Naidu was the Moderator of the Panel Discussion.

Highlights of the Discussion were as follows:
• LinkedIn, Facebook, Whatsapp and so on are the gateways to Digital future and students should utilize them effectively
• It is imperative to do Self Evaluation on Passion Vs Fascination
• Students should be encouraged to chase their passion where their competency lays
• Further reading on “Nidhi Mayurika – At 15, This Brilliant Bengaluru Girl has won a NASA Contest Thrice”. Nidhi went through the sites of various academic institutions and enrolled into courses on AstroBiology
• Digital Education is just like Democracy – Democratize your learning and every student has an opportunity to discover what you want to learn
• Language is not a barrier to learn and to build the nation
The event concluded with the distribution of Prizes of SSTH 2018 by the esteemed guests.