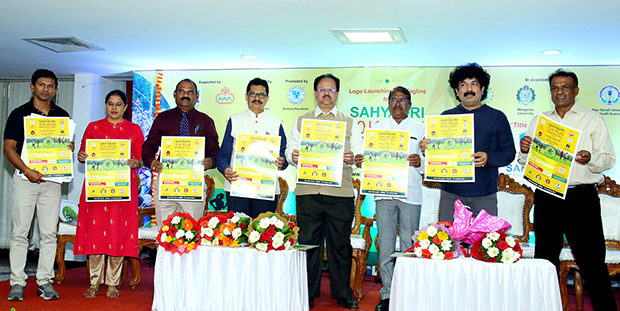 Mr. Manjunath Bhandary, as a President of DKAA, in his welcome address, expressed how Dakshina Kannada District has been contributing to the Olympian list and has also been conducting Marathons for the last few years successfully. Sahyadri 10K Run Mangaluru was first proposed by Mr. Anand Menezes whom he met in Mumbai Marathon last year. He then mentioned the support he received from universities like Mangalore University, Rajiv Gandhi University for Health Sciences and Visvesvaraya Technological University which further strengthened his plan to organize this event. He proclaimed that 10,000 is the targeted participation for the Run and also acknowledged that Govt. of Karnataka has sanctioned funds for the success of this mega event. A competition was held through advertisement in media for suggestions on Logo and Tagline. After thorough screening, the Logo and Tagline (Swaccha-Parisara-Hasiru-Usiru) has been selected and the winner will be rewarded, he stated.

Sahyadri 10K Run Mangaluru Logo was launched by Mr. K P Purushothama. As a Government representative, in his speech, extended absolute support for the event from the Govt. of Karnataka. He also mentioned of his endeavour to move Sports from a neglected sector to a priority sector and expressed wholeheartedly that Mangaluru has the capacity to lead sports in Karnataka state.

Later, the Poster of Sahyadri 10K Run Mangaluru was unveiled by Mr. Gurukiran Shetty who in his speech revealed that being a Brand Ambassador of the event, he has been practicing enthusiastically for the Run. He appreciated Sahyadri Campus for its uniqueness in providing world-class facilities for the students as he had visited the campus during the first half of the day.

Post this, Dr. S Sacchidanand publicized the Bib of Sahyadri 10K Run Mangaluru and shared his remarks on how Mangaluru is warming up for the event. He proclaimed that 02-02-2020 will be a historic day in Mangaluru, while praising Mr. Manjunath Bhandary for selecting this distinct date for the event. He explained how Sports should be an integral part of student’s curriculum which contributes to their holistic development.

Finally, Dr. P Subrahmanya Yadapadithaya launched the event website (www.10krunmangaluru.com) by scanning the QR Code. In his speech, he said that Mr. Manjunath Bhandary is the finest human being he has ever come across for his magical approach to serve his region and the state. He also emphasized that the five areas of total fitness – Physical fitness, Mental Fitness, Intellectual Fitness, Social Fitness and Spiritual Fitness have the greatest power to unleash potentials of individuals.

The ceremony came to an end with the vote of thanks shared by Mr. Steven Dias, Vice-President of DKAA acknowledging the presence of all the dignitaries including Dr. A J Shetty, Chairman-A J Group of Institutions; Commander DIG S S Dasila (Coast Guard Karnataka) and Mr. T Nanjundappa, Regional Head of Union Bank of India.